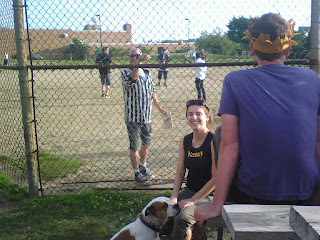 Just when I thought I had seen everything, The Providence Kickball League loses a player. She was running after a ball that had been kicked with abandon over her head when she fell forward, landing on her shoulder, possibly breaking her collarbone. Her teammates hovered over her while we immobilized her, first applying the cervical collar, then rolling her on her side and putting her onto the backboard. The opposing team, The Zombies, possibly extras from the Night of the Living Dead movie stood to the side as the wounded player was removed from the field to the cheers of the large crowd that had gathered.

Fourteen teams belong to the league, mostly twenty-something year old people having a ball. Or should I say, kick-ball. It seems like a great way to make friends, have some laughs and stop taking ourselves so seriously. Play Ball!

Does This Helmet Make Me Look More Aggressive?

The Design of the High-Rise Handline