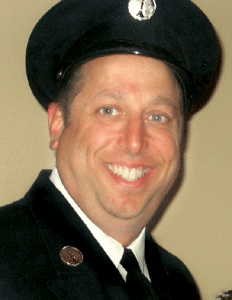 I worked with Lt. James Pagano’s father for a few years, back in the eighties. I didn’t know Lt. Pagano, but if he was anything like his father, we have lost a true gentleman. Rest in Peace, Brother Pagano, my condolences to the family.

CRANSTON — They began lining up around 3 this afternoon outside the funeral home to say goodbye to slain Cranston firefighter Lt. James A. Pagano — firefighters in dress blues and white gloves and solemn faces, friends and family.

Firefighters from Cranston, Providence, Bristol, Coventry and elsewhere have come to pay respects at the wake for Pagano, who the police allege was shot and killed Sunday by next-door neighbor Nicholas Gianquitti, 40. Gianquitti, a former Providence police officer, is now charged with murder.

Pagano “was a great guy, the ultimate family guy,” said James Moore, who retired as a Cranston deputy fire chief in 2002 and worked with Pagano at Station 3 for several years.

At first there were two lines to get into Nardolillo Funeral Home, with firefighters in one and friends and family in another. Shortly before 5 p.m., about 100 people were waiting to go inside.

The full Cranston command staff and the chief are inside with Pagano’s family.

An American flag flew at half-staff.

His funeral will be held tomorrow, starting from the funeral home at 8:45 a.m. More about the services and an online guestbook.

From The Journal: More about Pagano and the shooting.

Back in the Water