Feed the Police at Fire Life

The rest of the world might have gone nuts, but that is no reason for us to join them. Society is embracing the idea of questioning the police, as if the police were created to harass them. Showing disrespect to a uniformed police officer is a badge of honor these days; street cred gained through outright contempt for the badge is commonplace, accepted by society and embraced by the some in the media.

Everybody knows that firefighters are great cooks. The police officers in your district are painfully aware of this fact as well. As they sit in their cruiser, eating stale baloney and mayo on white bread, we are enjoying a T-bone steak, some garlic-infused mashed potatoes, and perhaps a side of steamed broccoli.

It wouldn’t kill us firefighters to extend an invitation to our brothers and sisters who are not as fortunate as us when it comes to taking care of the most basic survival needs. Breaking bread together is the most down to earth human connection there is. Sharing a meal brings people closer, and the closer we are to the people who have the unenviable job of keeping a hostile, unappreciative, and increasingly bold and belligerent public from harming us as we perform our jobs, the better.

Even if the cops can’t physically join us at the table, a hot plate beats a cold sandwich or takeout any day of the week. Here’s a little something you can throw together on the cheap; it’s a staple in every firehouse in Providence, and though every firehouse chef likes to take credit for inventing it, truth is, the recipe originated in Mrs. Morse’s kitchen and was modified by yours truly to meet the needs of the never-ending appetites of my fellow firefighters and sometimes police. 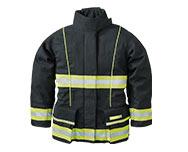 Brought To You By

Thanks to the San Marcos, Texas Fire Depertment for the image.

Because we were Firemen