She actually apologized for calling us.

“I didn’t want to bother you, but I can’t stand the pain any longer.”

Her home was meticulous, nestled on a quiet street in the Mount Pleasant section of the city, surrounded by beautiful yet modest homes that showed the pride of their owners. The city has a few neighborhoods like this, though they are becoming scarce. She handled her pain well, as a lot of people from her generation are prone to do. No theatrics, just a matter-of-fact explanation of her problem. She insisted on walking to the ambulance, turned out the lights and locked the door behind us.

She was remarkably independent, especially when considering her age; born in 1920 she had seen a lot of changes during her nine decades on this earth. She reluctantly agreed to ride on the stretcher, but only after I insisted, and looked uncomfortable with “all the fuss.”

“No fuss at all,” I said and assessed her vital signs, noted a-fib, hypotension, and a weak pulse on my report. She didn’t fuss about the IV, and I managed to get it on the first try, regardless of her paper-thin flaky skin, spider veins, and obvious dehydration. I watched the IV drip, slowed down the flow, and tried to put an 02 mask over her face in hopes of getting her oxygen level past 93%. She won that argument but only after explaining that I was the first person she had talked with in weeks, and I simply couldn’t deprive an old lady her dying wish.

We settled on a nasal canula, I disagreed with her assessment of her condition, and we got moving, leaving her peaceful sanctuary and traveling through a more desolate part of the city toward Rhode Island Hospital.

We looked out the dingy rear windows, watching the world go by backward, and settled in for the five-minute ride. There wasn’t much activity at four in the morning; the old houses that we passed look much the same in the dim moonlight as they did when she was a younger woman, and it was easy to forget what is so obvious in daylight. When the sun rises and the city wakes, the real changes become clear.

A few of the houses were still illuminated with Christmas lights.

“I don’t think you will have to stay in the hospital for Christmas,” I said, assuming her ailment could be treated without an extended stay.

“It doesn’t matter,” she said, sadness filling her voice.

“My husband passed away last year, and I’m just waiting to join him. We were married 64 years; it’s hard to live without him.”

As we neared the hospital, she told me of the greatest gift he ever gave her. “As he neared the end he told me this: If I could live my life over again I wouldn’t change a thing. That kind of love is what keeps me going. We had a wonderful life together.”

The truck stopped at the ambulance bay. “He must have been a great man,” I said.

“He was. He was a captain on 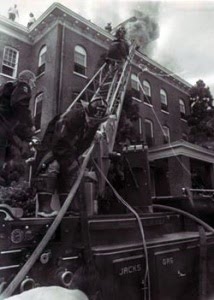 the Providence Fire Department, Ladder 5 at Point Street.” She glanced at the captain’s bars that adorned my collar and gave me a knowing smile, which I gladly returned. We wheeled her in, and she was swallowed by the hospital, but her memory lingered.

I had been at work for nearly 38 hours, having worked an overtime shift between my nights, and never had I felt so lonely. I looked toward the east, where my home sat some eight miles away, and the first traces of dawn touched the sky. Below it, my wife slept, alone in our bed, again. If she could live her life over again, would she do things differently? Life is hard for a firefighter’s family. It was up to me to make sure that she wouldn’t want to change a thing.